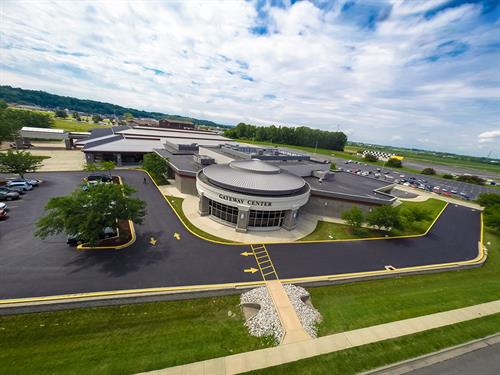 As of May 1, 2018, the Gateway Center is now owned and operated by the City of Collinsville.

Our multi-purpose convention center is centrally located in the middle of the Metro East IL & St. Louis region. We offer beautiful event spaces that are accessible and flexible with ample free parking and proximity to hotels and attractions that will make any event a success. With in-house catering, decor and production services, an event planner has all the elements they need for an excellent event experience.

In the mid 1980’s the State of Illinois made a sizable investment in the construction of public assembly facilities in various communities throughout Illinois. The state legislators' goals were to improve quality of life opportunities for its citizens and to spur economic development. Both of these objectives continue to be met by Gateway Center. As a result of this initiative, the Collinsville Metropolitan Exposition Auditorium and Office Building Authority was created by the Illinois Civic Center Act. The Authority owns and operates Gateway Center. The purpose of the act was to accomplish the aims of the State of Illinois to enhance the ability of its citizens to avail themselves of civic and cultural centers.

The local development that has resulted from the construction of Gateway Center could hardly have been envisioned back in the mid 1980s when the idea to build a convention center first came about. Now Gateway Center anchors the Eastport Plaza area, which has evolved into a viable hospitality business center, that affords visitors and event participants the opportunity to meet, eat and sleep in one location.

In 1995, just shortly following Gateway Center’s initial years in operation, the decision was made by the Authority to look at the feasibility of expanding Gateway Center. The Authority felt that the future of Gateway Center depended on its ability to bring larger events to the Center and provide more space to allow current customers to expand their business. This would in turn bring more people to the area that will spend more dollars at local hotels, restaurants, service stations, shops and attractions. For the reasons of business retention, missed opportunities and competitive considerations, two subsequent expansions of Gateway Center have come to fruition adding more than 45,000 square feet to the venue’s original footprint.

The present day 105,000 gross square foot facility, has hosted as many as 624 events annually, and has attracted a variety of users from around the world. In 2011, this multipurpose facility has been responsible for bringing nearly 2.8 million visitors to Southwest Illinois over the duration of its history.

Free viewers are required for some of the attached documents.
They can be downloaded by clicking on the icons below.