A Brief History of the Collins House and Its Owners 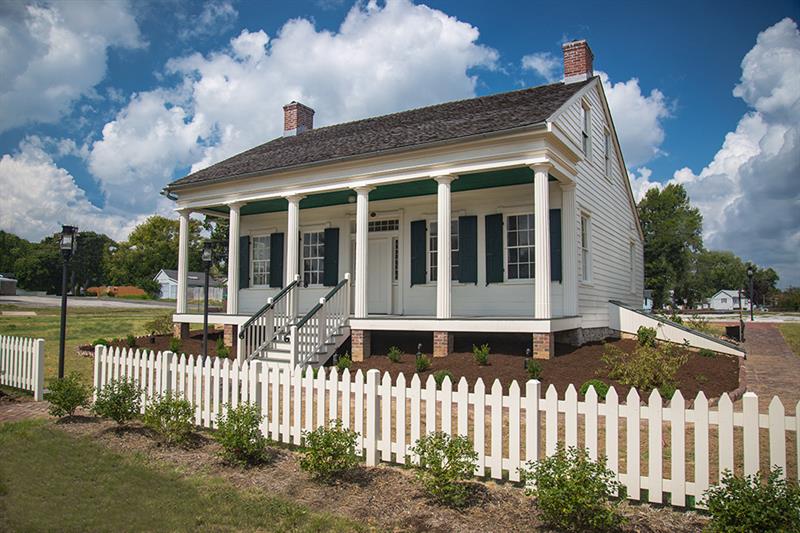 In 1837, the first plat of the Town of Collinsville, executed and recorded by Elizabeth W. Collins (the widow of Willam B. Collins), Joseph Darrow, and Horace Look, being all of the owners of the property.

On October 2, 1845, Elizabeth W. Collins, as guardian of the children/heirs of William B. Collins, sold and conveyed Lot 6, Block 1 of the Town of Collinsville to Daniel D. Collins. This property was located on the northeast corner of Main Street and Center Street; said lot 66 feet on Main Street and 148 ½ feet along Center Street, and bordered on the rear by Wood Alley.

It was upon this property that Daniel D. Collins built a house for himself and his new wife, Elizabeth Anderson Collins. The house was built on the rear portion of the property

On March 17, 1849, Daniel D. Collins and his wife conveyed the property to Lewis Lancaster.

On April 1, 1836, Lewis Lancaster and his wife conveyed the property to Joseph Lemen Jr.

On July 22, 1856, Joseph Lemen Jr. and his wife conveyed the property to Andrew Edwards. In this transaction, he apparently financed this purchase by giving a mortgage to the seller, Joseph Lemen.

In October 1858, the property was purchased by the Chancery Court.

On May 8, 1860, the interest of Andrew Edwards and his wife was conveyed by a Masters Deed back to Joseph Lemen.

On December 2, 1861, Joseph Lemen and his wife conveyed the property to Oliver C. Look. During this time, Look may have built the building on the east 22 feet of Lot 6. An old photo exists of “D. W. Jones Candy and Confectionery Store” with the house on the west and set back from Main Street towards the rear of the building (as seen in the old photograph). Oliver lived on the property from 1861 to 1885.

On April 22, 1887, Oliver C. Look and his wife conveyed the property to James I. Dilliard (his son-in-law, married to their daughter Mary Look; Mary lived in the house as a child. James and Mary were the parents of Irving Dilliard who purchased the house in 1998 and donated it to the City).

On March 30, 1892, Charles Gindler conveyed to the State Bank of Collinsville the west 2/3 of Lot 6 Block One.

Apparently, at that time the west 2/3 of Lot 6 was vacant, except for the house which had been constructed by Daniel D. Collins in 1845.

The Bank desired to build a larger commercial building to house the bank on the first floor and other businesses on the second floor. It appears that this was the time the house was moved seven blocks west to the 621 West Main Street location.

William and Agnes Bonn purchased the house about 1915 and the widow Agnes passed away in 1996 and in 1998 the house was to go to auction, but just before that happened, Irving Dilliard purchased the house and then donated it to the City of Collinsville. It appears to be the oldest surviving house in the City.